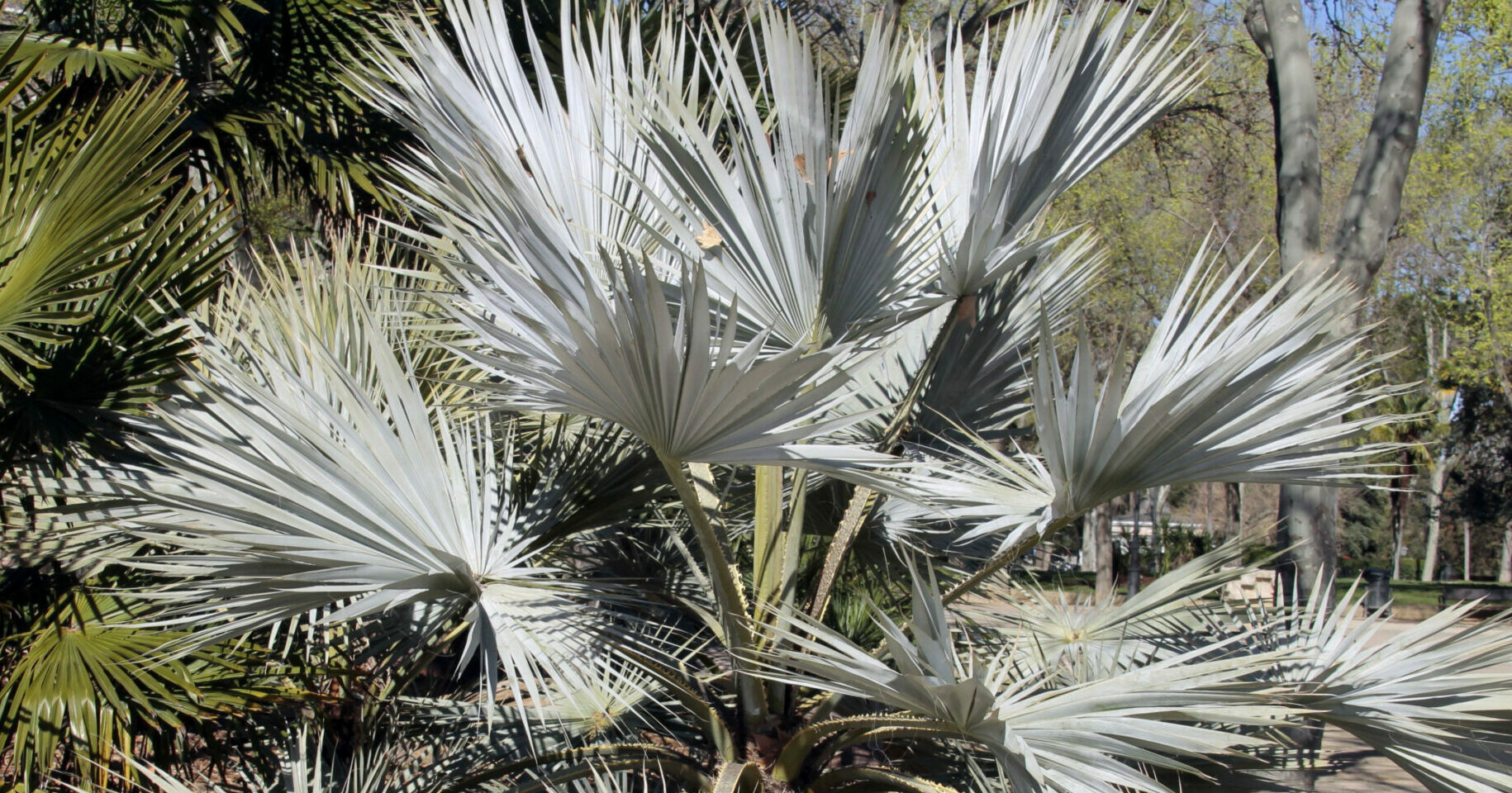 Native to regions of Baja, California and northern Mexico, the Brahea Armata palm is a unique species in the cold hardy palm world.

While not as common as other cold hardy varieties out there, this palm is definitely one to consider in your search, given you live in the right climate conditions.

With its unique silvery blue fronds, the Brahea Armata is similar in appearance to the popular, but not quite as cold hardy Bismarckia Nobilis. This is especially prominent when young.

Sound interesting? Then let’s read on and find out if this is a palm you should consider adding to your landscape.

Known by its common name Blue Hesper palm and Mexican Blue palm, the Brahea Armata is quite the slow grower.

The fronds are a striking bluish silver to bluish green color and costapalmate in form.

While it can take many years, these palms can get to approximately 30-50′ in height and 15-20′ wide at maturity.

Individual fronds can get up to 10′ in width attached to slightly armed petioles.

If not kept regularly trimmed, the fronds will create a “skirt” at the base of the crown similar to the Washingtonia Filifera.

The cream colored flowers bloom in early spring with the flower stalks extending out from the crown and hang downward. This is a unique feature of this palm, looking similar to a willow style firework falling in the sky.

These stalks are long and can get up to 15′ or more in length. Seeds will ripen during the summer months with fruit starting out yellow and turning dark brown. While the fruit is edible, they are not tasty, however the seeds can be roasted and consumed if desired.

These palms are monoecious, so they contain both male and female flowers creating viable seed on a single palm.

The Brahea Armata is drought tolerant at maturity, although when young, they will need regular watering in a well draining alkaline soil mix.

The Brahea Armata palm is an ideal choice for zones 8 and above.

They will tolerate temperatures down to approximately 10F in optimal conditions. These trees can receive some frond damage at these temps and may require some cold protection during severe cold snaps.

They prefer drier, hotter climates similar to their native habitat. These palms can also grow quite well in mild Mediterranean climates adding some versatility, although growth will be slower.

They are found along the west coast of the U.S. as far north as Seattle, Washington and western British Columbia. Long term survival in these areas will require planting it in a warm, sunny spot.

You will find these palms more commonly grown in the southwest U.S. such as Phoenix, Arizona, southern Nevada and throughout California.

These palms will not do well in extreme subtropical or tropical conditions where humidity levels are severe, especially during the summer months.

The Brahea Armata is a great pick if you are looking for a larger silver form fan palm to add to your landscape.

They don’t get quite as large as the previously mentioned Bismarck palm, so that can also be a plus if you have a smaller yard.

Their bluish silver color will act as a great contrast in the landscape with common green form plantings.

They are an ideal choice for street planting as well as an ornamental palm for areas of your yard where they will have room to spread out.

The Brahea Armata is also relatively maintenance free other than fertilizing a couple times a year. Additionally, the occasional pruning of old fronds will keep this palm looking its best.

As mentioned before, these palms are slow growing. Actually they are VERY slow growing, especially when young.

This can be off-putting for folks wanting something that’s faster growing and don’t want to wait years or even decades for something full size. If you are interested in obtaining one of these palms, then it is advisable to get one that is at least a few years old.

Due to their slow growth, the Brahea Armata can be harder to find for purchase than other cold hardy varieties. This makes them quite valuable, but also expensive. Purchasing these palms in areas where they are more commonly found can help with affordability.

There are several nurseries and big box stores throughout the southwest U.S. that sell these palms and can be a great starting place. I have actually had luck finding people selling them at reasonable prices through online forums as well. PalmTalk is a great one to check out if you’re not sure where to start.

The Brahea Armata is relatively free from pests and diseases. However, they are susceptible to root rot if not given properly draining soil in long periods of wet conditions.

As with many cold hardy palms, there are some things you will need to take into consideration if you want to grow one of these palms.

While the Brahea Armata is an excellent choice for many areas of zone 8 and above, they may not be the best for everyone in these zones.

Regardless, if you are on the search for cold hardy palms to add to your landscape, the Brahea Armata is an interesting one to check out!

Here are some pros and cons about this palm:

As an Amazon Associate I earn from qualifying purchases. This website also contains affiliate links from other online merchants where I may earn a commission.