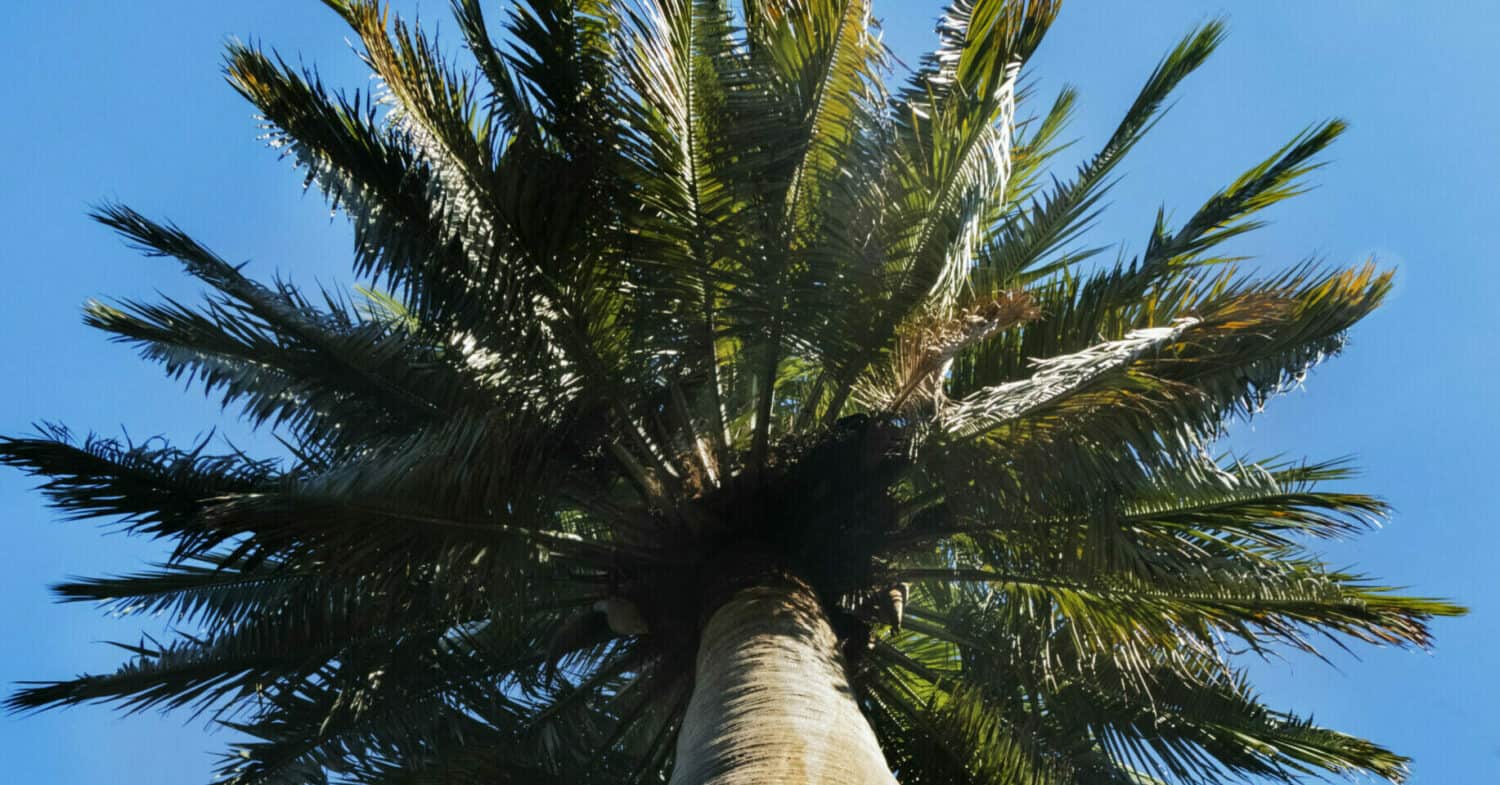 Surprisingly, there are palm trees for zone 8 climates that can survive these chilly temperatures with little to no winter protection!

Here are 9 common cold hardy options for your landscape…

Ideal for zones 8a-11, the Brahea Armata is a cold hardy, drought tolerant fan palm with silver green fronds.

They are a slow growing and can get up to about 50 feet tall when mature, however this can take many years.

The Brahea Armata is a palm for anyone living in arid to semi-arid climates, but also live where temperatures get into the teens, like higher elevations in the southwest parts of the U.S.

Blue Hesper palms are native to Baja and northern Mexico where they enjoy hot, dry conditions. They are also found growing in warmer temperate areas of the UK and other mild, Mediterranean climates across the globe.

The Brahea Armata prefers full to partial sun, have minimal water requirements and love well draining soil.  They will survive temperatures down to about 10 F in their ideal growing conditions.

For growing zones 8b-11, the Butia Capitata is a medium size palm with silvery green pinnate fronds that extend from the crown and create a unique curve back toward the bottom of the trunk.

The trunk is stout and can reach a height of approximately 25 feet.

These palms are a great choice for anyone living in semi-arid as well as warmer Mediterranean climates.

They are low maintenance, but will drop a lot of fruit, so some level of clean-up will be necessary.  The Butia palms are very versatile and have been growing successfully along the U.S. west coast all the way up to milder areas of British Columbia, Canada!

The Butia Capitata has been also confused with the strikingly similar Butia Ordata and is sometimes lumped together with the Capitata, which apparently is less cold hardy and most commonly still found in areas of South America where they are originally native to.  The Butias that are currently found cultivated in North America are most likely the Ordata species.

Butia palms are also known for their tropical, fibrous fruit that can easily be made into jelly or wine.

They prefer well draining soil, part to full sun and can survive temperatures down to approximately 12 F once established.

For zones 8a-11, the Chamaerops Humilis is a very popular cold hardy shrub-like small to mid size fan palm.  They can be seen growing together with multiple trunks or can be grown individually.

They will form “suckers”, which are new sprouts underneath the main trunk and can be used to propagate in addition to seed starting.

Known by their common names of Mediterranean Fan or European Fan, these palms are for anyone wanting a self-pruning, low maintenance specimen that won’t take up a lot of room.  Once mature they can get approximately 10-15 feet tall and about 15-20 feet wide, making them ideal for small spaces or near patios.

Chamaerops Humilis palms can also grow in a wide range of climates ranging from hot, dry to cool coastal Mediterranean and is the only palm native to Europe.

They prefer well-draining soils, full to part sun, are drought tolerant and can take temperatures down to a chilly 10 F.

Cold tolerant to zones 8a-11 and native to central parts of Chile, the Jubaea Chilensis is an extremely large, very slow growing cold hardy pinnate palm that can be grown in a variety of climates.

They have an extremely wide, light grey trunk that can reach up to 80 feet in height after many decades.  The large pinnate fronds of this palm are known to have a green to sometimes bluish green appearance in some locations.

The Chilean Wine palm is a great candidate for a wide range of climates and for anyone looking for a massive palm with a very tropical look.  They don’t seed for many decades, so they are great for folks looking for a very clean and maintenance free palm.

These palms love heat, but do incredibly well in cooler, wetter Mediterranean climates as well.  They are known to grow in many areas of the western U.S., Australia, Europe and even Ireland!

The Chilean Wine palm prefers moist, but well-drained soil and are also quite drought tolerant.  They prefer full sun to partial shade and will tolerate temperatures down to the low teens without much trouble.

Ideal for zones 8b-11 and native to Eastern Asia, the Livistona Chinensis is a medium sized palm with large, light green palmate fronds that droop at the leaf tips, also giving it the common name of Chinese Fountain palm.

Known by it’s common name Chinese Fan palm, they can grow to around 40-50 feet tall and are known to grow at a faster rate if given enough moisture.

These palms are ideal for folks living in more humid climates where temps can reach the mid to upper teens in the winter months.  For anyone living in even colder areas, the Chinese Fan palm is a great candidate as an indoor potted palm if given plenty of sunlight.

The Chinese Fan palm is drought tolerant, but ample watering will speed up growth.  Full sun is preferred, but when young, part sun is recommended.  They are tolerant to a variety of soils and can withstand temperatures down to about 15 F.

For zones 8b-11 The Phoenix Canariensis palm is native to the Canary Islands in Spain.  They are a very large pinnate palm with deep green fronds.

They have a solitary trunk that can reach a height of approximately 60-80 feet and even higher in some cases.

Canary Island Date palms are an awesome pick for anyone living in a wide range of regions around the world, from cold Mediterranean to semi-arid and even hot, humid climates.  They are most recognizable along the California coast especially in the Bay Area and San Francisco.

These palms are very common in many places across the globe such as the UK, Italy, Australia, Hawaii and Pakistan, just to name a few.

They can grow in a wide range of well draining soils, prefer full sun, but can also thrive in varying degrees of shade.  They are very drought tolerant and will take temperatures down to approximately 15 F.

A great pick for zones 8a-11, the Sabal Palmetto is a highly versatile palm with shrubby light green costapalmate fan leaves.  The are native the the southeast U.S. as well as areas of Cuba and the Bahamas.

Sabal palms can get up to 80 feet tall, but are quite slow growing, even in their ideal growing conditions.

They are perfect for anyone living in hot, humid conditions, but have also been successfully grown in other drier areas such as Southern California, Texas and Mexico.

These palms are also great candidates for cool, Mediterranean climates such as Europe, the northwest U.S. and even milder areas of western Canada.  In the cooler areas their growth will be glacier slow since those climates lack the hot summer heat.

The Sabal Palmetto prefers full to part sun, versatile to a wide range of growing conditions and does well in poorly draining soils.  They can handle a descent level of drought, but do best with regular watering and high heat.  They can survive temperatures down to at least 10 F once established.

Saw Palmetto are native to the southeast U.S. and have been growing for hundreds of years in areas of Florida where it is most widely found.

They can get up to 10 feet tall and clumps can be up to 20 feet in diameter.  They very rarely grow a trunk, but older specimens can develop a trunk over many years.

Saw Palmetto are for people living in areas with hot, humid summers as they love moisture and don’t thrive as well in excessively dry conditions.  They are perfect for planting underneath taller trees to create an attractive underbrush along the ground.

The berries of the Saw Palmetto are known to be a popular supplement for prostate health as well as a diuretic and can possibly aid in preventing prostate cancer.  The berries are also vital as food for the native wildlife and are protected in many areas of Florida since these berries are of high value.

The Saw Palmetto prefers part sun with hot, humid conditions.  It is at least as cold hardy to many of the same areas that the Sabal Palmetto will grow and will tolerate poor soil conditions as well.  Cold hardy to at least 10 F, likely even lower.

Hardy to zones 8a-11, one of the most recognizable palms and the only palm native to the southwestern U.S. is the Washingtonia Filifera.  These are large, fast growing palmate palms with huge light green fan fronds.

They have a massive, solitary trunk that can reach up to 60 feet in height, but have been known to grow taller.

California Fan palms are for folks living in drier, arid climates, want something that is fast growing and have room in their yard for a larger palm.  Other than the occasional pruning and seed cleaning, this palm is relatively maintenance free and of course, very cold hardy to many areas.

There are two species of Washingtonia in the genus, the other being the less cold hardy and more moisture tolerant Washingtonia Robusta, which would be a good candidate to try in zone 8b and higher.

They prefer full sun, dry conditions and are adaptable to many soil conditions.  They do not do well in cold, wet conditions, but can handle hotter, humid areas such as the Texas gulf coast.  The California fan palm is most often found in the southwest U.S. including California, Nevada, Arizona and even around the most southern areas of New Mexico.  They can take temperatures down to about 10 F in the driest conditions.

Keep in mind that many palms on this list such as Brahea, Butia, Livistona, Phoenix and Sabal have multiple species within their genus that have similar cold hardiness tolerance, so you actually can expand your inventory far beyond just the 9 palms I’ve recommended here.

Whether you’re living in the high desert or the cool Mediterranean, there are plenty of hardy palms for your zone 8 climate to experiment with! 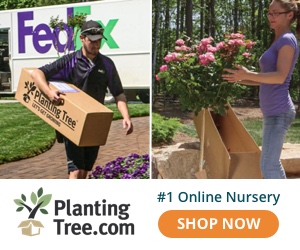